The signs that led Kevin Pangos to Milano? They are everywhere, in Rho, in Trento and more 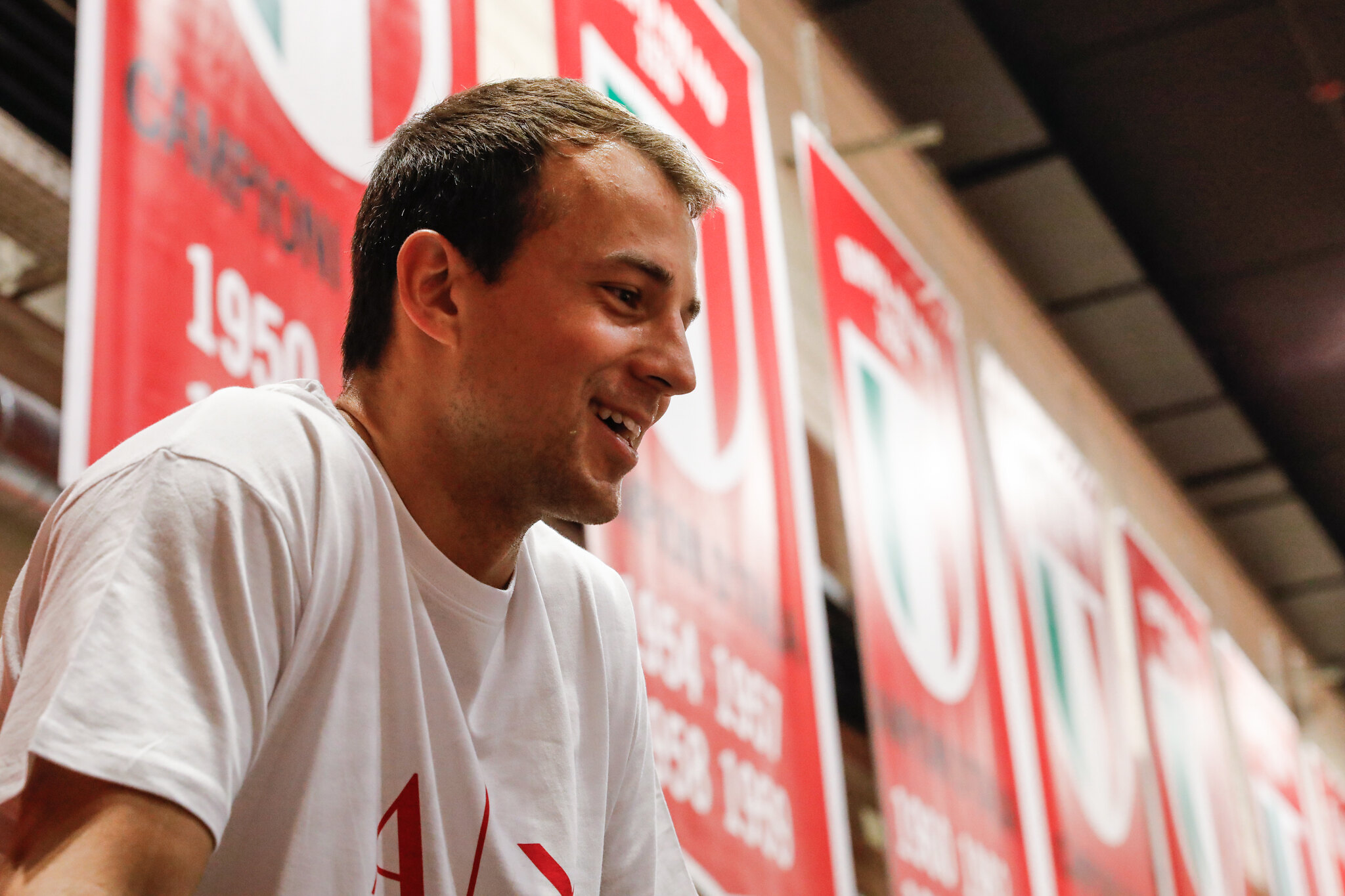 Signs are all over the place. Unmistakable. His grandfather and his grandmother, both from Slovenia, left the country after WWII choosing the freedom of being separated from families and roots over remaining behind the iron curtain in the then-Yugoslavia. His grandfather, Roman Pangos, went to Italy, Udine, and eventually was transferred to Capua, in a refugee camp where he met his future wife. Together, at some point, they left Italy to go where some relatives were already living, in Canada.

But everything started in Italy. Yes, Italy, the same country where at 15, so close to Milano he could almost touch it, Kevin Pangos led a team from Ontario to the win in the prestigious Rho tournament. He was instrumental in defeating the Lithuanian team in the championship game. For him it was some kind of coming-out party. You don’t comeback from something like that. You become a household name, even if you are from Canada, a hockey-mad country, including in the Pangos’ household: his uncle, Jim Koudys, has been drafted by the New York Islanders in 1982 and his cousin Patrick has been drafted by the Washington Capitals.

And again, his dad, Bill Pangos, a basketball lifer who coached the women’s team at York University, in Toronto, for about thirty years (Kevin’s sister, Kayla, played for him), met his future wife (a tough basketball player herself) at a basketball camp in the area, named Olympia. Look? Signs are everywhere.

More evidence? When Kevin was climbing the ladder in Canada basketball, getting big exposure with the youth national teams, Leo Rautins – one of the best Canadian players ever – selected him for the senior team before a trip to Italy in 2009. Kevin at the time was just 16. In Trento, Italy dominated the game against Canada, Andrea Bargnani was a star that night, scoring 28 points, Marco Belinelli was there, Gigi Datome too and so Peppe Poeta. The outcome decided, Coach Rautins decided to make his 16-year-old point-guard the youngest player ever to actually play for Canada’s senior team. Kevin beat the record held by Rautins himself. A couple of possessions into the game, Bargnani rotated slow on defense, so Pangos had the time to shoot the three. He was 16. He didn’t blink. He made it. And he made another three a short time later. He finished his first game ever with six points. Italy is all over the place. Now, he can call Milano home.

Kevin Pangos wanted to be a player from day one. He was excellent while playing hockey, he was good at soccer and definitely great at volleyball. Following, his parents’ examples, he was an outdoor freak, looking for a game or an activity to keep himself entertained, to have fun. Basketball was in the family blood, however. His dad was a good guard and later a well-respected coach. His mom was a player, too, and so his sister. He was born and raised in Holland Landing, a little bit north of Toronto, Ontario, the Canada’s state where basketball has always been a little more than a minor sport. Although, in Canada hockey is everything. And Toronto is no exception, Toronto is hosting the hockey Hall of Fame, nonetheless. But for sure, Pangos and his generation of players benefitted by NBA’s expansion to Canada in the Nineties. While Vancouver didn’t last much in the NBA, Toronto was another story. Vince Carter is not a Canadian, but he made the Raptors respectable and even cool for a generation of young players. Steve Nash, a real Canadian, was another key figure, the player Pangos was going to be compared to, inevitably, since the size is similar and the position on the court identical.

Most of the young Canadian players however are still leaving the country early to get schooled in the U.S., get the recognition necessary to become household names and maybe reach the NBA. This kind of journey has worked well for many players. Anthony Bennett didn’t succeed in the NBA, but he was the number 1 pick in 2013. Andrew Wiggins was selected first overall in 2014 and he has been a great player for Minnesota and now Golden State. Many more Canadians are producing successful NBA career: Jamal Murray at Denver, Shai Gilgeous-Alexander at Oklahoma City, RJ Barrett at New York and so on. Naz Mitrou-Long, the other Ontario-native coming to Olimpia now, followed the same path, going to the States at 15. In this regard, Pangos has been different. He resisted the temptation to move to the U.S. and elected to finish high school at Dr. Denison, right at home. He found his exposure because after the Rho championship run, with an Ontario selection, he became interesting for the youth National teams, too.

In 2009, he led Canada to a bronze medal at the FIBA America Championships, averaging 18.4 points per game. Canada qualified for the 2010 World Under 17 championships. Again, Kevin led Canada to a bronze medal in Hamburg, Germany. Anthony Bennett was there and so Andrew Wiggins (who was two years younger than the rest of the guys to clarify). Kevin averaged 15.8 points and 4.1 assists per game (he had 13 points and five assists in the bronze-medal win over Lithuania). The next year Kevin led Canada at the Under 19 World Championships in Latvia, averaging 13.5 points and 3.1 assists per outing.

Canada’s National team success led to a lot of college scholarship offers for Pangos. He was very close to sign for Michigan. They had the point-guard slot available for Pangos or Trey Burke, a future NBA player. Burke said yes, Pangos took his time to finish his visits. So, he signed for Gonzaga, on the Northwest side of the country, a college renamed Guard University, because John Stockton made it famous in the Eighties. But back then, Gonzaga was just a school from Spokane. Later, a lot of success was experienced, and more great guards came up, starting with Matt Santangelo and then Blake Stepp, Jeremy Pargo and David Stockton, John’s son and for a while a Pangos’ teammate. On top of that, many Canadians players have been recruited by the Zags, Kelly Olynik, Robert Sacre just to name a few. And more foreigner players went there, including Domantas Sabonis, now an NBA star at Sacramento. It was the right place for Kevin Pangos.

He came off the bench in his first Gonzaga game against Eastern Washington. He scored 11 points coming off the bench, a very good way to start a career. But, a sixth man, he was not. For the next four years, he never came off the bench again. In his second game, on a nationally televised game on ESPN against Washington State, Kevin made nine three pointers and scored 33 points. Enough said. He had 30 points against Brigham Young, finished the season averaging 13.6 points per game, was named rookie of the year in the WCC, he was named to the All-WCC first team, but at the same time the season didn’t finish well for the Zags. After, his 30-point outing against BYU, Gonzaga was eliminated by St. Mary’s, led by the Aussie, Matthew Dellavedova. Pangos, who had scored 27 points in their previous game, was limited to seven points. And in the NCAA Tournament, Gonzaga was ousted in the second round by Ohio State.

In his second season, Gonzaga lost twice for the entire regular season, at one point the team was ranked at the number 1 spot in the country, vindicated the previous season loss by defeating St. Mary’s in the WCC championship game and entered the NCAA Tournament with sky-high expectations. However, the second round was one more time an unsurmountable hurdle. Wichita State eliminated Gonzaga, ending its season. Pangos was again named to All-conference first team. The 2013/14 season began in Maui, Hawaii, Gonzaga won three of its first four games and Pangos was at his scoring best, averaging over 27 points per game during the trip. Unfortunately, Pangos was plagued by injuries all season long, the toe first, the knee later. He struggled, led the team to a nice record and to the WCC championship. Again, he was All-WCC first team. Coming Tournament time, Pangos was forced to face a terrific opponent, Oklahoma State, in San Diego. OSU was led by Marcus Smart, a soon-to-be lottery pick and now the reigning defensive player of the year in the NBA with the Boston Celtics. Kevin outdueled Smart 26 to 23 points and led Gonzaga to a big win. It was the last of the season: the Zags for the third straight times were eliminated in the second round. 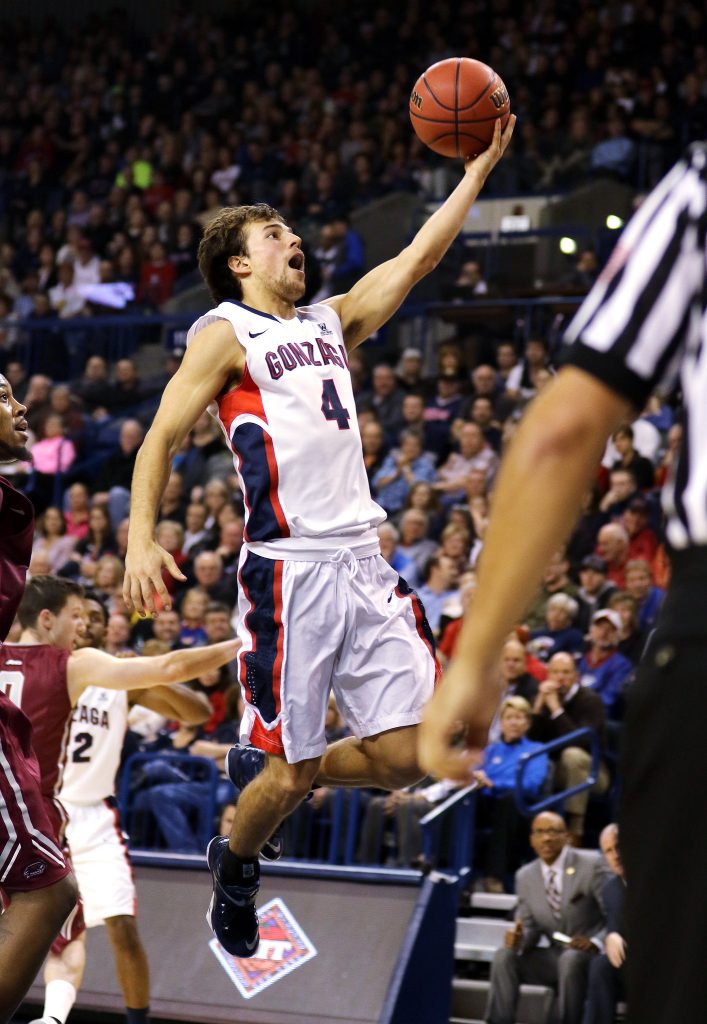 As a senior, Pangos was at his best. He won the player of the year award in the WCC as Gonzaga compiled another dominating season, losing once in the WCC and twice overall. After winning the WCC championship for the third time, Pangos was determined to survive the NCAA Tournament first week and he did. Gonzaga defeated North Dakota State, Iowa, then UCLA and set up a memorable match-up against Duke to get to the Final Four. Pangos stayed on the court 40 minutes, never taking a break. At the end, Gonzaga lost, but Mike Krzyzewski himself, praised Kevin for his effort. “He looks unflappable. He’s got a great face all the time. He’s got a great leadership face,” he said.

He was supposed to move to the NBA. His career spoke for him. But he went undrafted. The Dallas Mavericks signed him for their summer league team, he could have taken the G-League route, being called up every now and then and prove himself. He decided otherwise, he wanted to play and the highest possible level. Gran Canaria offered him a good opportunity in the Spanish league and the Eurocup. The team reached the EuroCup semifinals and Pangos was named to the All-EuroCup Second Team. That led to an offer to play in the EuroLeague for Zalgiris Kaunas under the team’s then-head coach, Sarunas Jasikevicius. More success was about to come. In his second season in Lithuania, playing next to Brandon Davies, Pangos led the team to an unexpected trip to the Belgrade Final Four, while being included in the All-EuroLeague second team.

He played so well that Barcelona wanted him in Spain, where again he had Davies among his teammates. His first season was excellent, but the second was ruined by injuries right when Jasikevicius joined Barcelona for a Kaunas reunion. To make up for Pangos injury, Barcelona signed Malcolm Delaney. He came back for the ACB bubble in Valencia, but his time was over in Spain. He moved to Zenit Saint Peterburg for another great season. He was named to the All-EuroLeague first team and led Zenit to the playoffs, against Barcelona. They forced a Game 5, after stealing Game 1 and almost Game 2 on the road, too. It was a series for the ages. He averaged 16.2 points and 7.2 assists per game. He played too well not to get an NBA chance. So, he accepted less money and moved back overseas signing for the Cleveland Cavaliers.

It didn’t go as planned. Cleveland was a top-heavy team at his positions, with Collin Sexton, Darius Garland, even Ricky Rubio. He was limited to be marginal. He went to the G-league a couple of times, appeared in 29 games, and then finally relented. Signs are all over the place. Udine where his grandfather went to escape from Yugoslavia, Capua where his granddaddy met his grandmother, Rho where he became a prospect to be followed, Trento where he became the youngest player ever to suit up for the Canadian National Team and finally Milano. A place to be called home. 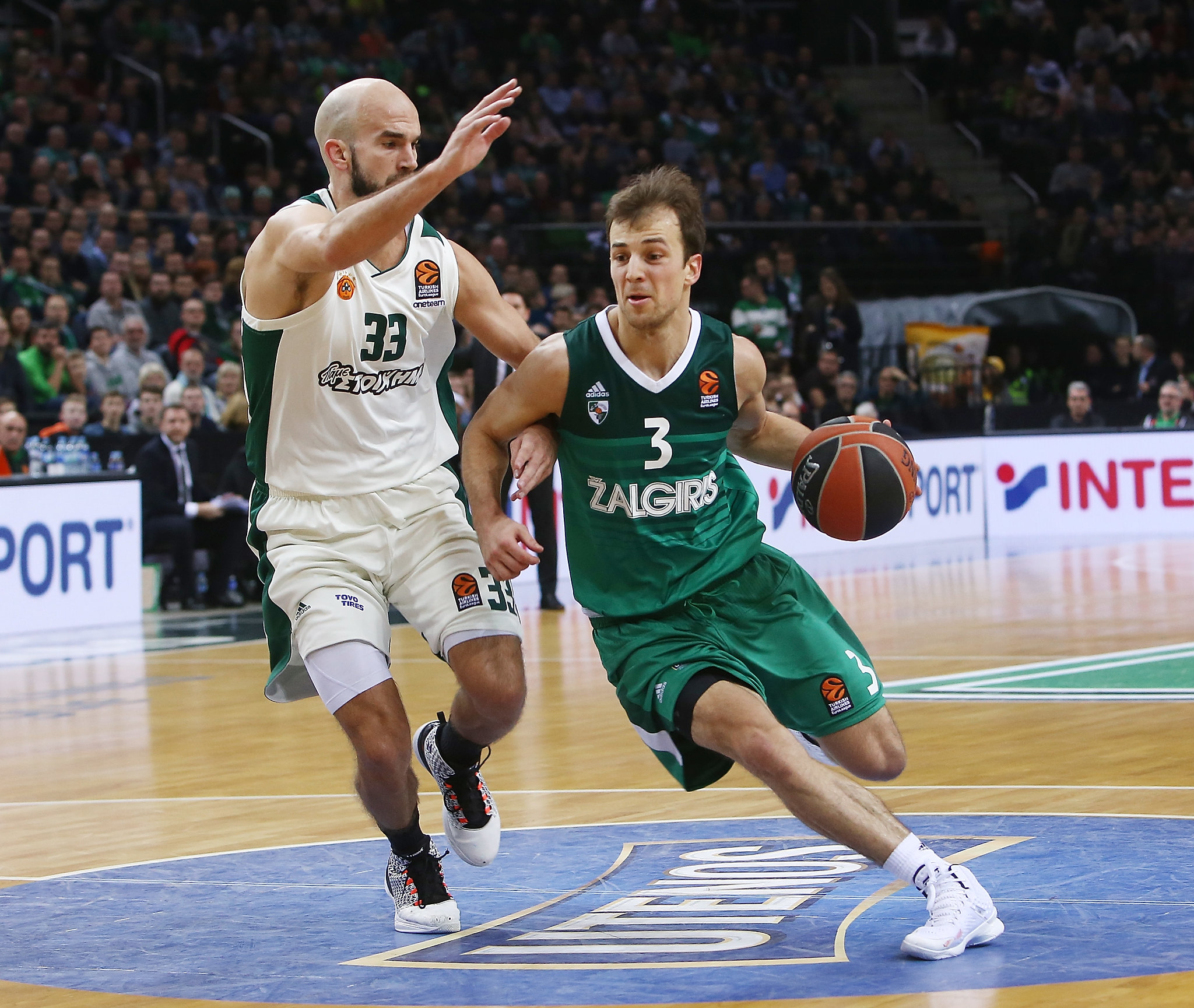 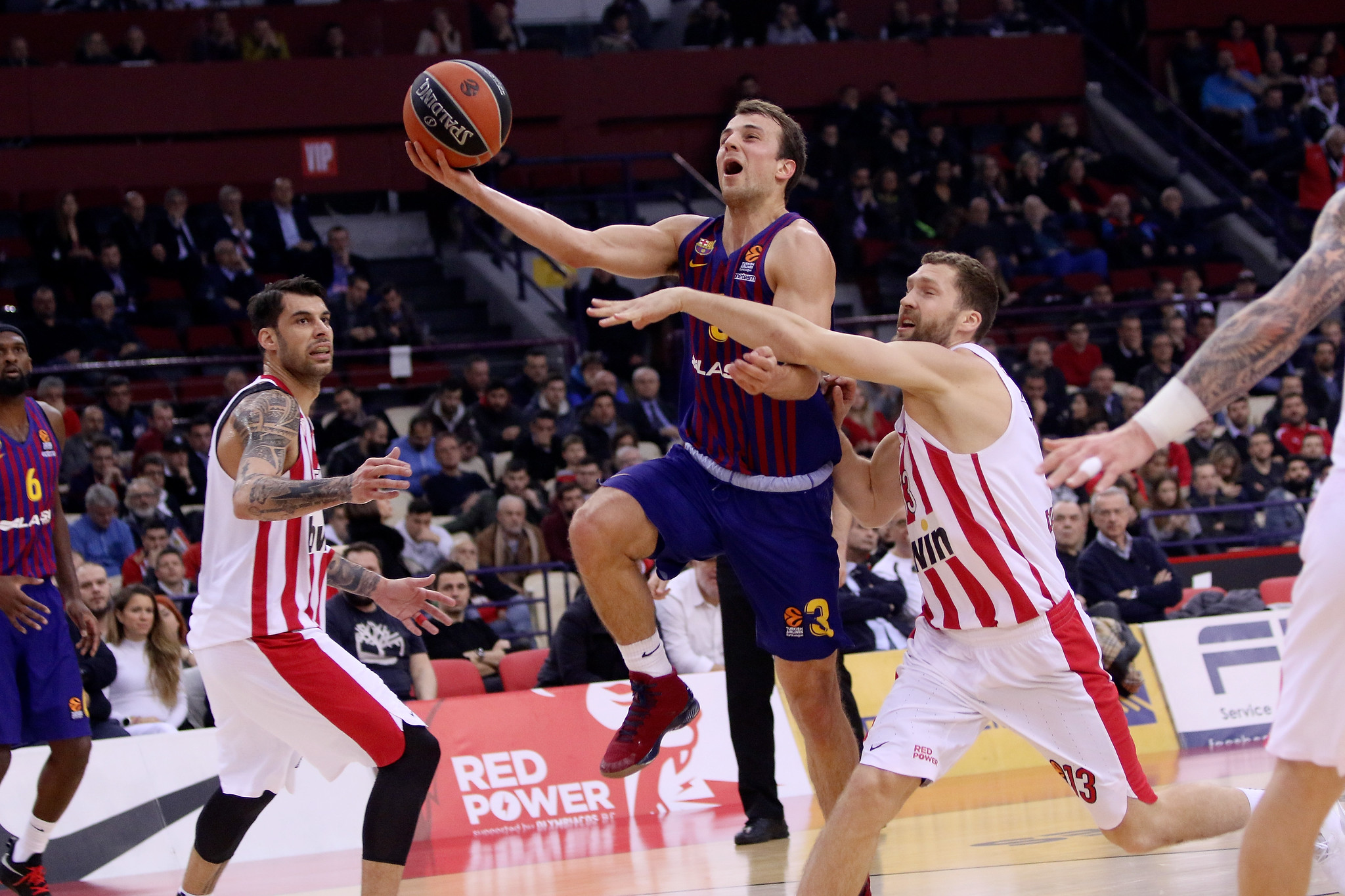 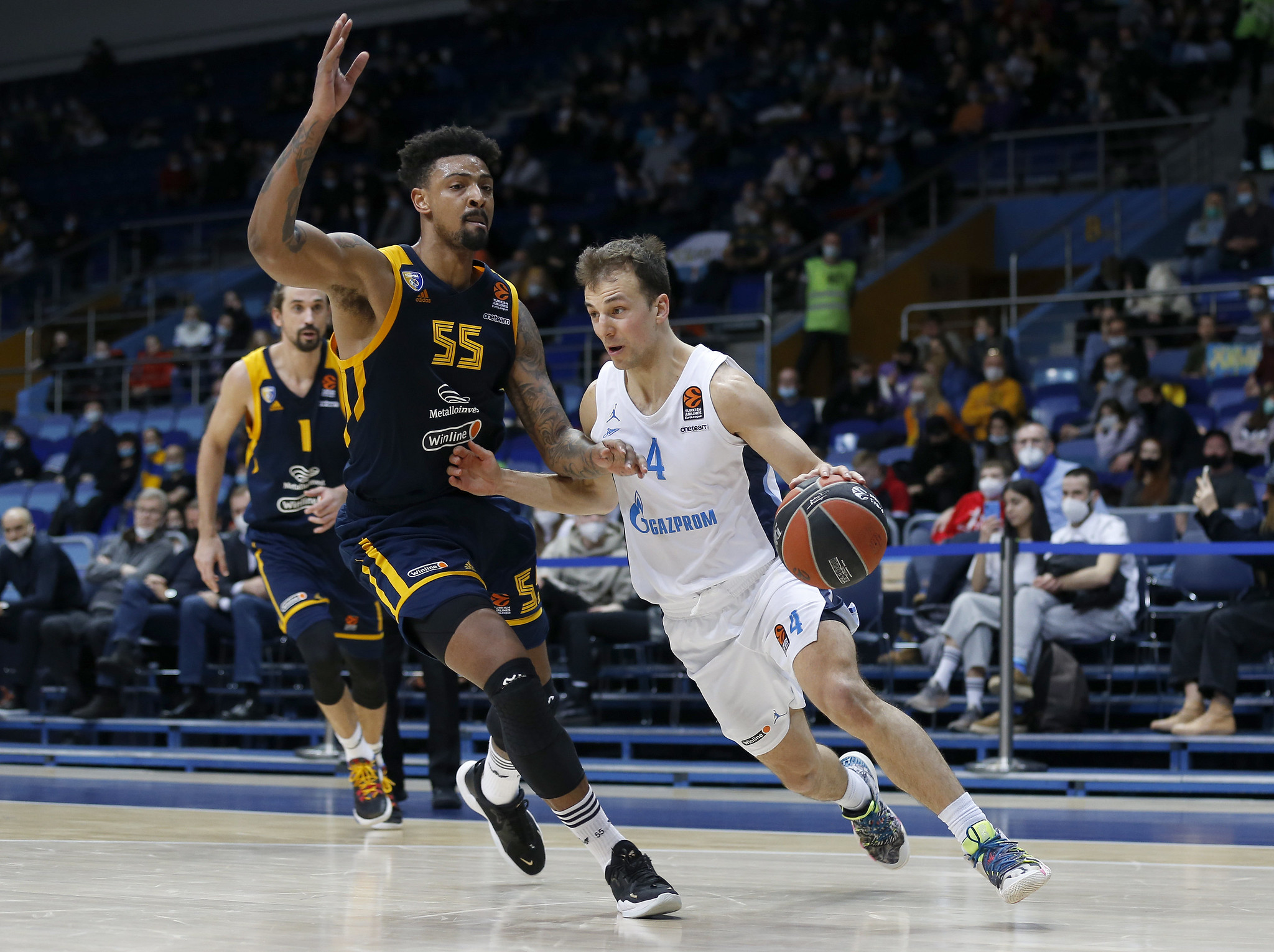